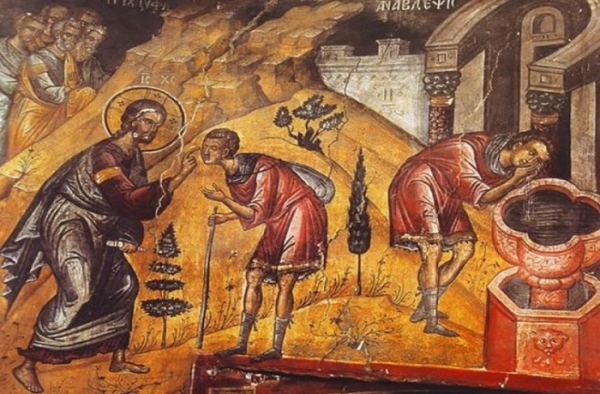 Today's gospel passage, my dear brethren, refers to the healing of a man who was born blind. A blind man who is healed by Jesus, without the latter asking Him for the miracle, supports the truth and struggles to open the eyes of the spiritually blind Pharisees. Logically, the blind man of the excerpt that we read during this Holy Liturgy should be the main subject of today's sermon.
However, the behavior of the parents of the blind man presents intense and unacceptable manifestations of an unacceptable maneuvering, that sacrifices the truth for the sake of expediency in favor of the powerful rulers and leaders of that time. The opportunists have never ceased to exist in this world, and certainly they are still present among us today. Let's try to psychologically analyze them.
The parents of the blind man are afraid to acknowledge the miracle that happened to their child who was born blind, so that they do not become excommunicated and thrown out of the Synagogue. They masterfully avoid speaking truthfully about a certain event, they reply «Ask him; he is of age. He will speak for himself.» and they don’t offer a clear answer though they were sure of the miracle and were supposed to be grateful to the Lord who healed their son. Terrified, they left their son alone to face the intimidating threats of the Pharisees.
This phenomenon is common through all our human History. Men chose to show attitudes and speak words about people and events by masking the truth because most of the time they choose the side that fits their own worldly interest and what it may bring for them instead of what their conscience has to offer. They act and utter stuff wrongfully without any objectivity, because being subjective meets their own ends and justifies their means. They are like a sunflower that does not follow the earth’s cycle around the sun, but on the contrary it shakes and can’t resist the stormy wind that bend it to its will. They look like wind turbines that faithfully follow the direction of the blowing wind.
Since the parents of the blind didn’t want to be affected or lose any of their privileges disregarded the guidelines of the morality and the dignity. They clearly appear that they are dealing with secular criteria for the miracle that happened to their son. They effortlessly prove that integrity and physical strength do not necessarily indicate one’s wellbeing or a quality of life, and that physical illness does not necessarily mean sinfulness.
The blind man's parents, although they have physical eyes and see the physical light, remain blind and do not take in consideration the spiritual light of the Divine revelations. Unfortunately, many people today follow the footsteps of the spiritually blind parents. They use their «wires/radars» and determine the exact moment «where the wind blows» so that they skillfully lean the scale towards the powerful and influencing people and leaders using flattery and slander, and insure that they stay favorited and don’t get rejected, wishing to stay secure and avoid being expelled from their safe zone.
And yet how much do we need today genuine human characters. How much do we lack of people with principles, those who know how to say the yes and the no, who are not dazzled by ephemeral expectations. Unfortunately, people who speak their mind with parsimony and courage are rare. We are waiting in vain for the rebirth of the society, the one that we’ve built and made sure to keep it unchanged if we do not create within and around us outspoken and dignified characters that shine with courage, wisdom and manliness.
If we want our lives to change, and with us gradually the whole world, then we have to renew the inner man and we have to stop tottering between injustice, individualism and spiritual confusion. Our blindness comes from our indifference and grows as long as we neglect it. How long will we live in darkness?
The world will never be moral, as long as it hosts opportunists. Let this teaching today be the lesson for those who seek only social progress without caring about any ethics!!!