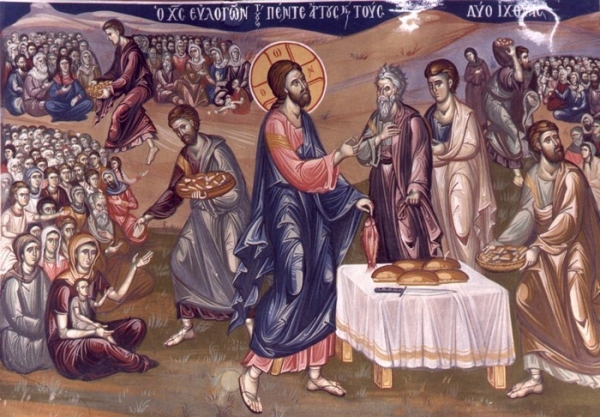 The event of feeding «five thousands» that resulted in satisfactory fullness as well as the other similar event of feeding «four thousands», where, with seven loaves of bread and some fish, four thousands men were fed, without counting the women and the children, and where «seven basketfuls» were gathered as leftovers (Matt. 15: 32-38), show the interest of Jesus Christ in the simple and everyday problems of the people, like their concern for their daily edible food and nourishment. But today's evangelical passage unfolds before us another deeper message that has its own special significance that we can draw from, and another view of our modern way of life.
The Lord's command to gather and store, all the leftovers, after a great number of crowded people consumed and ate fully enough the most of it in the middle of the desert, seems meticulous and exaggerated. When someone has something so abundant, why would he need to bend over and collect the leftovers? And yet, if this action was not right, Christ would not have done it. It is a specific detail that all the four evangelists narrate in their gospels.
In the old days when there was no abundance of the material goods, people had more respect for the provisions sent from God and that they earned with their own sweat and hard labor. They were conscious of their greater value as opposed to what we do today in our daily life. Anything left over was stored to be used again at the right time. With this sense of housekeeping, they had order in their lives, that ensured them not only financial self-sufficiency, but also inner fulfillment.
Today, things have changed. We are swimming in the benefits of our consuming society and we do not feel the need for the above-mentioned provision. Abundance leads to waste, which is a sign of disorder and recklessness and obviously it’s not just about food and nourishment. Waste became the companion of the modern citizen of this world, and most of the time, in order to show his wealth or how much is his worth, Man does not evaluate anything and feels self-sufficient, very powerful and omnipotent.
Waste is met daily and all the way; at home by the housewife, at school by the children, at the entertainment centers, at work, in everything and everywhere. Reading the above, one may think that waste is just a phenomenon that can only have economic or social expansions. This is wrong! Because as a phenomenon, it also has a moral aspect. Those who have rich material goods and abuse what they have by throwing it away, misspending becomes a temptation, especially, for those who are deprived and in real need. The word of God is relentless and unsparing towards the rich and wealthy persons who spend their lives in excessive pleasure and reckless dissipation of their wealth. It is not their right to have uncontrolled and provocative disposition of their possessions, even if they have them in excessive abundance.
Sociology finds in abusive conduct, elements that are inconsistent with the precepts of social justice and equality. Ethics, in such conduct, reveal elements of an inner inanity, foreign to the plexus of virtues of the true love that we have for ourselves and for our neighbor. Finally, in a Christian society, manifestations of provocative waste are unequivocally anti-social and way far from the Christian spirit that encourages people to be perfect in everything.
Waste cannot be exempted, neither as a way of life, nor as a way of behavior, because unfortunately, through it, the lack of education and the lack of internal togetherness and the spiritual destitution are revealed.
Everything that has been described can be completely understood, in the ten-years period of the «Economic Crisis» that we recently experienced on a worldwide scale or in the period of the «Coronavirus» that still haunts us, with the result that our fellow man reaches the lowest step of human dignity like having to beg for a single dish of food. Therefore, no excuse, for the abuse of wealth, can be accepted when we can train ourselves by practicing the rational economy, which is a virtue when it is done without any infliction.