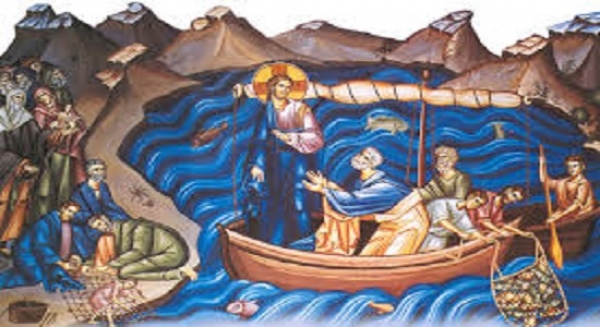 In today's passage of the Gospel of Luke, Jesus wanders the shores of Galilee and a multitude of people follow Him and gather around Him with longing and passion to attend and listen to His teaching. As He sees two fishing boats holding ground next to the shore of the lake, He steps into one of them, into Simon's boat. He asks him to move it a bit further away from the shore so He may be at a better reach to teach the crowd that assembled to heed His words. After He finished His teaching, the Lord asked Simon one more time to sail deeper and throw in their fishing nets. Simon answered: «Master, we've worked hard all night and haven't caught anything. But because you say so, I will let down the nets». When they had done so, they caught such a large number of fish that their nets began to break and a great astonishment took hold of them.

It is worth mentioning that the Lord intervenes in the life of the Apostles, He steps in and He speaks out reaching everyone who gathered around Him. He also took charge and insinuated to the fishermen… a new method for fishing! «Grandfather let me show you your vineyards». In a way, He was urging them to have faith, addressing all the fishermen who grew old navigating and casting their nets in this lake, and who knew it like the palms of their hands. We observe that their obedience to the word-commandment of the Lord was surprisingly rewarded by the ingathering of a considerable amount of fish that eventually started to break their nets.

In this passage, however, other important truths emerge. First, that people's efforts are worthless without the help of the Almighty God. The apostles of Jesus were fishing, but couldn’t catch anything. The disciples being humans may have thought for a moment that the lake would certainly offer them the desired amount of fish, but after being deceived in their first attempt, trying on their own and working hard for nothing all night long, they obeyed the Lord and sailed again for the second time where they surprisingly became partakers of the miracle. And for this to happen someone needs a pure, humble and selfless heart.

The humble and pure man who has good will and fully trusts God recognizes how limited are his powers, thus he puts his hope and life in God’s hands. God does not reward human efforts as much as He rewards a humble and obedient heart. Peter's wholehearted obedience proved to be worthy, and that is why his obedience was immediately rewarded by the mercy of Jesus. Peter, as an experienced fisherman, knows that it was almost impossible for a human to succeed in this fishing venture. Now anyone would ask what is the cause of last night's failure and today's success? The answer is simple: in their first endeavor Jesus wasn’t with them but in the second Jesus was there among them!

Today, and after almost twenty centuries, we as modern fishermen, continue to venture for our own profit and happiness in the murky waters of the sea of ​​our lives, without being willing to listen and do what He asks of us to gain our eternal life and be with Him by His grace.

Have we listened to His word so that we can accept it in our lives? How much do we have to sacrifice to stop making mistakes? Regardless if we accordingly, see them dignifying, whether our deeds are practiced in our private and comfort zone or socially out in the open. We admire Peter, and though we can become like him, we do not let go of our old habits and continue to do the same things until we get fully drained. We are astonished when we see the disciple's heroism, without trying to follow his example and become heroes like him. We expect a miracle, not because it offers an occasion to start a personal relationship with the Lord Jesus Christ, but because we need it to satisfy our own skepticism and curiosity… As an attempt to discover if there is a God or if this God really exists!